In this tutorial, I will be showing you all about how to make commands and the three different types of command blocks.

To put it in the most simple terms, commands are chat messages with a slash in front. When there is a slash at the very beginning the game knows it is a command so does what you tell it to instead of sending a chat message.

You do not need to know any commands right now but to explain the concept I will need a command to demonstrate with so I will be using a command called /say.

This command basically says in chat whatever you put after the '/say' part.

NOTE: To be able to use commands in the world you are in you must have cheats enable in your world or if you are on a multiplayer server you need operator.
Below I did it without the slash, it is quite an unnoticeable difference but this is only because of how simple the command '/say' is. The slash is very important, when not used it will just assume you are trying to make a normal chat message. 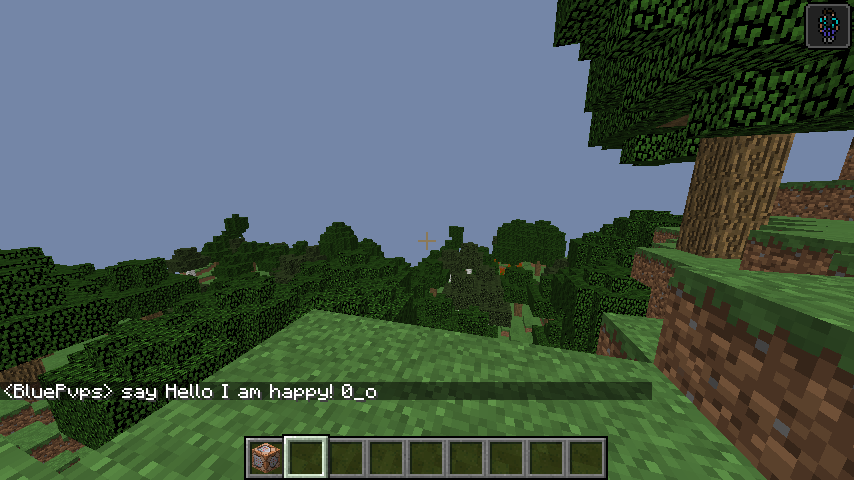 There are tones of different commands and used together can create amazing creations! However for this to be made automatic and worth using we need a way to use commands without the player typing them in every second. For this we use command blocks
These are the three different types of command blocks in minecraft, they all have separate uses that I will show you in this tutorial. The command blocks and chat share the exact same commands they just run them differently.

Lets start with how to get a command block, they are not in the creative inventory and there is no way to obtain them in survival. To get them we need to use a command in chat called '/give'. If you do not know much about it you do not need to right now but type in:

BluePvps being your in game name (IGN). If you do not know what this is type in chat and it will be the bit in brackets. 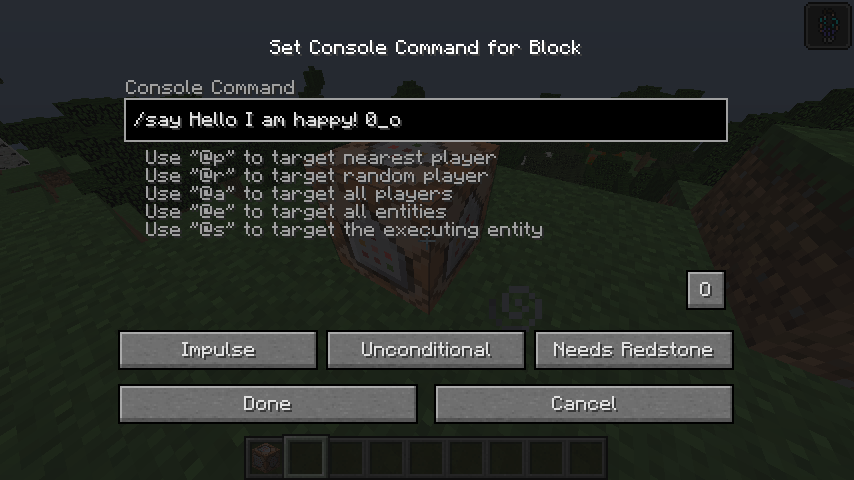 There is a text box where you can type anything in, this is your command. Then there is also a list of 'Use @...' which we can ignore for now.

The done button saves your command and cancel will not save what you put in / edited since you opened the command. Now the more important parts, the other three buttons.

The first one changes what type of command block it is which we will do in a minute, the second one we will cover next tutorial and the third one says 'Needs Redstone' this means every time it is powered by a redstone signal (Button, lever, redstone torch etc) it will do your command. 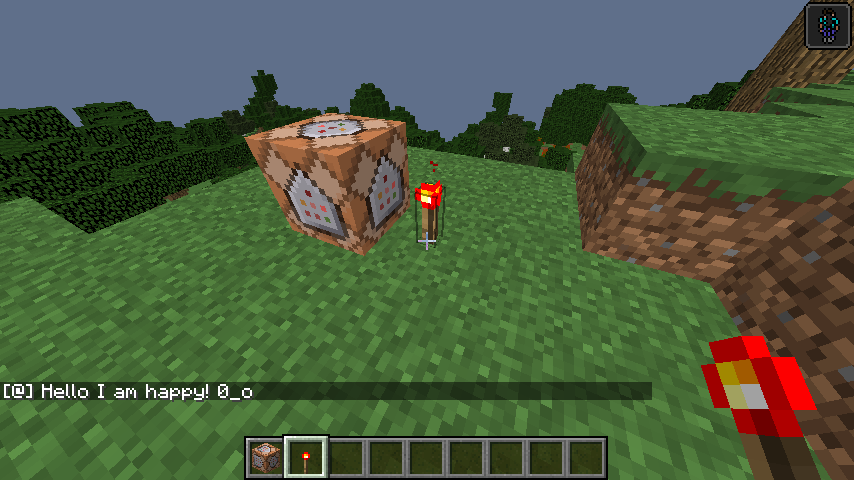 However if you go back into the command block and change the 'Needs Redstone' to 'Always Active' and press done or enter on your keyboard then you will see it does the equivalent to being activated by redstone.
That is basically how command blocks work and the inpulse command block. Time for the next command block type. Change it by pressing the first button. I am going to talk about repeating command blocks next.

If you haven't worked it out yet, it works exactly the same but instead while activated, does the command CONSTANTLY until unpowered. When I say constantly I do not mean once a second, I mean 20 times a second. This is because all of minecraft works on a 20 'ticks' a second clock. Note these can sometimes spam outputs for example it may say 'Command successful' all the time so make sure to do:
/gamerule commandBlockOutput false
To turn of outputs in chat. 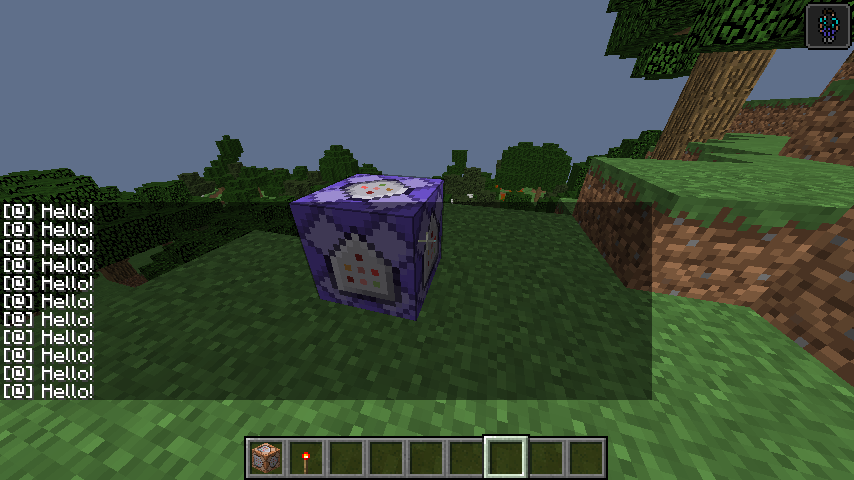 And lastly the chain command block. Remember you can have lots of commands running at the same time! And to save your commands from looking like this: 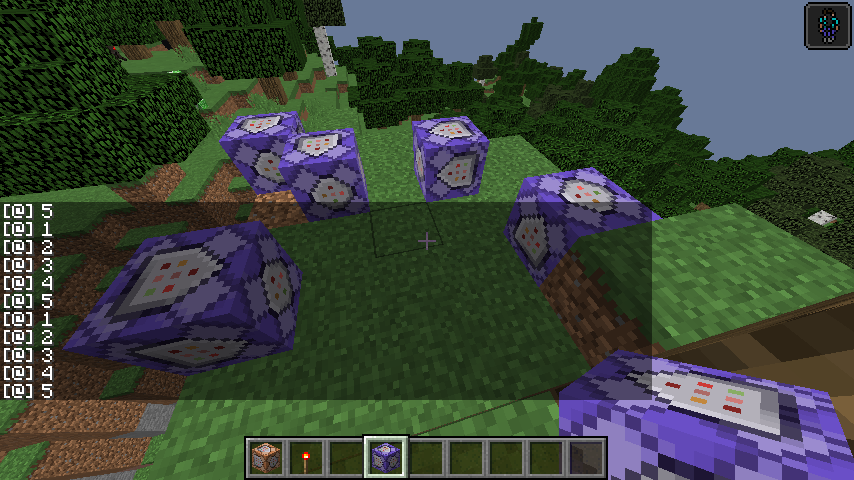 You can link them all together with green command blocks to achieve the exact same thing. 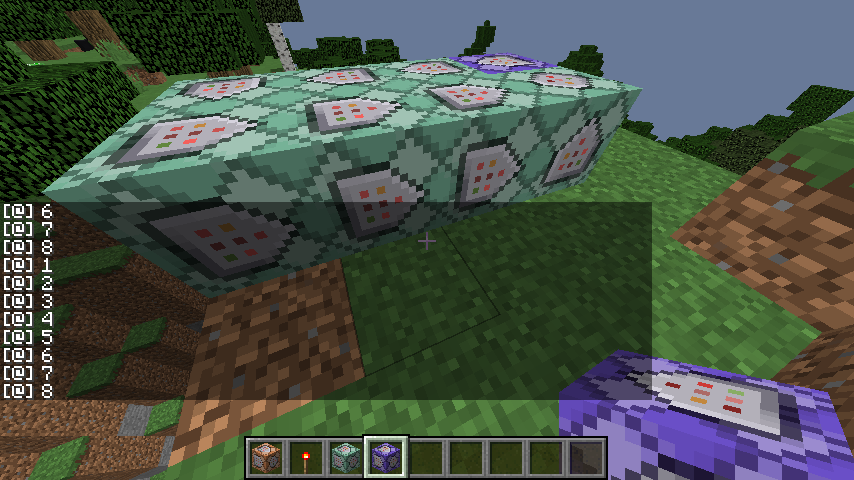 To get these to work, you need all chains to be on always active all the time and as you can see all the arrows face into the next one. The will all run in order and only start from the begin once it has ended which still happens 20 ticks a second. These chain commands also work with impulse commands.

They basically are a chain of commands running one after another that only run if the one before did (So only if your repeating or impulse is on). These can not be used by themselves.

I hope this helped you all! ~Blue
Next