In this tutorial, I will be showing you how to use the /effect command along with showing some example commands.

The /effect command is super useful as it does the equivalent of a potion but has way more customization and it is in command blocks which always makes anything cooler ;)

Firstly we have a selector like normal who we want to be effected by this effect. Then we have the effect, you can just tab complete through them or to be quicker you could type the first few letters of the effect then tab it.
/effect give @p minecraft:night_vision
That is all you have to do to get the command running. By default the effect lasts for 30 seconds at the lowest level and it shows particles, but we can change all that if we want to.

Just simple put the time after the effect, then after that put the amplifier/strength (Lowest is 0 then goes up) and then at the end we can put true or false to tell Minecraft whether we want it to have the particles or not that appear around the body. If you have hide particles to true it also doesn't show the effect in the top right of the screen like other normal effects.

If you make the seconds large enough, it will change it infinity which makes it last until they die.
/effect give @p minecraft:jump_boost 10000

Amplifiers max out at 255 and when the amplifier is over 250 the effects start to mutate and they have cool effects. Take levitation. For example, when you set the amplifier to 255 it makes you hover! 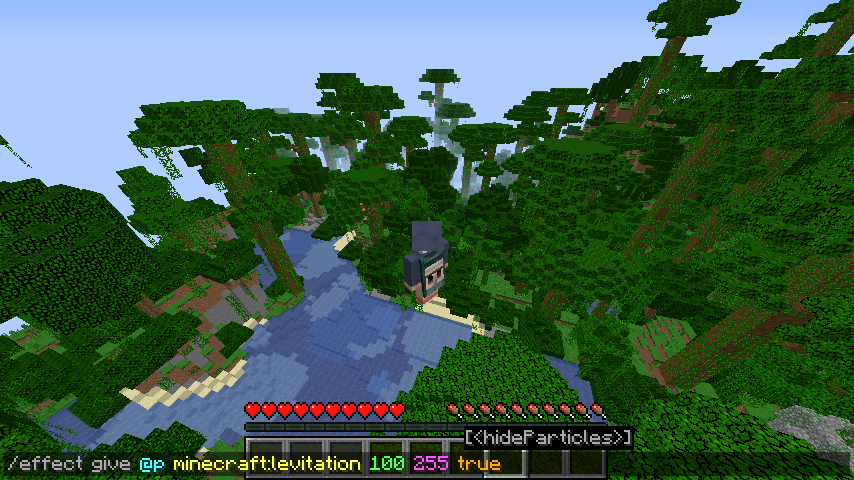 And when you set it to 254 for example it makes you hover down instead of up.
/effect @p minecraft:levitation 30 254 true
Most effects do similar weird effects when they become max for example jump boost stops you from jumping at all.

You can also do for the second command:
/effect clear <selector>
To remove all effects on the entity specified or

/effect clear <selector> [<effect>]
To clear a specific effect.
Next